The Outlander Season 3 DVD Sneak Peek Event, heralding today’s release date, lasted a little over an hour, but author Diana Gabaldon and Executive Producer/Writer Toni Graphia, led by Entertainment Weekly’s Maureen Lee Lenker, were very forthcoming on a variety of subjects, including one subject that is, indeed, stymying—how do you describe Outlander when you’re trying to explain it to someone who’s never read the books and never seen the series? Is it a romance, or is it bigger than that?

Gabaldon takes issue with the classification, and when Lenker asked if she was getting used to the idea, she was unequivocal. “Well, people do respond to romance or to love or to sex or some combination of all three of those. They’re not exclusive terms and you will find all of those things in books within a genre.” What she objects to, she says, is the limitations of that definition. “A romance novel, in people’s minds, is a courtship story about people who spent 90 percent of the time focused on each other…undergoing various things that keep them from that obvious attraction and finally ending up [with them] either married or in bed—in that order, we hope—and that’s it. Romance novels have no sequels. 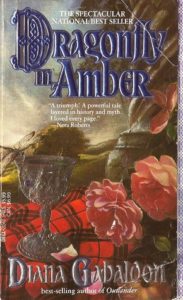 Once the courtship story is over, the story’s over. In fact, when I wrote Dragonfly in Amber, any number of people said, ‘I don’t want to read it, the story is over with Outlander, they’re together…and there’s nothing interesting going to happen to them after that.'”

Gabadon insists she never intended Outlander to be a romance novel. “It’s not, even though it does have a courtship story. In fact, when my publisher decided to try to sell it as a romance because they couldn’t decide what to sell it as, romance was the biggest market to which it might conceivably appeal. They released it at a convention of romance writers, half of whom loved the book. The other half were furious because they said, that’s not romance, and they were dead right. Even today, if you say romance, it evokes a knee-jerk idea of what you’re talking about, which does not resemble this story, these books or this show at all.” She adds, “It doesn’t mean that there is no element of love or sex, but those are things are always in fantasy fiction, historical fiction and everything else. Those particular elements aren’t exclusive to a romance novel. And I don’t like the limitations, not only for the images it evokes, but it also cuts off the entire male half of my audience.”

I found Gabaldon’s reasoning sound, and it made me think: how would I describe Outlander? I know I would object if I heard someone call it a romance, just as the author has. As an experiment, I asked fans on social media to describe the books/show to someone who’s never heard of Outlander…in one sentence. Here are some of their responses:

Outlander is a unique love story between a dashing 18th century Scot highlander warrior and a 20th century English WW2 nurse that transcends time and space and captures the essence of humanity and love in all of its flaws and glory!! —Michele Pinto Delorier

A timeless tale of love, told through the genres of historical fiction, adventure, time travel and romance—Val English

WWI nurse falls through a crack in time, chaos ensues! —Heather Vater
The most romantic, sexy, historical, science fiction time traveling novel ever written!—Kathleen Heckman
Outlander, based on a bestselling series of novels by Diana Gabaldon, [is the story of] Claire, a World War II–era British nurse who finds herself transported back through time to 18th-century Scotland, where she falls in love with Jamie Fraser, a highlander caught up in the last Jacobite uprising—Here I borrowed Benji Wilson’s edited but sound description of the show, or the books, in Emmy Magazine https://www.emmys.com/news/mix/all-eyes-outlander 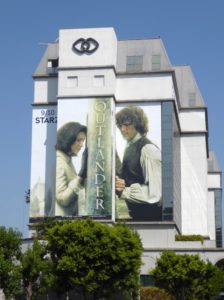 All the descriptions offered above are accurate and enticing, but my point in asking for people to try and describe it: It’s hard! Diana Gabaldon has written a series of books that in some ways, defy description, at least if you’re trying to capture the scope of her storytelling.
Which leads me to the great debate among Outlander fans as to why the series has not received more recognition from major awards shows, specifically in the the acting and best drama categories. [What I hope to offer in my posts, when relevant, is my professional opinion/insight, based on many years in television publicity. They won’t be specific to any show I write about unless I worked on it, in which case I will tell you that, but will be intended as a guidepost, and in some cases, as a jumping off point for inside television discussions]
Caitriona Balfe, who stars as Claire Fraser, has gotten most of the attention, including Golden Globe nominations, but the Television Academy hasn’t responded in kind, other than the three technical nominations the series has rightly garnered. STARZ CEO Chris Albrecht has chided the Academy voters for ignoring some of the programs on peripheral channels and new platforms for the standard awards fare on HBO, AMC, and other “prestige” networks. Albrecht also chided the Academy for not transforming its awards system and categories to reflect the medium’s vast growth.
So too, Outlander missed out on 2017 eligibility because of its production schedule. 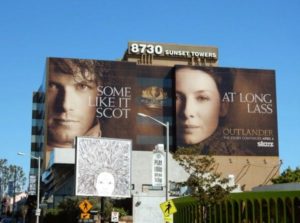 Another theory, which hews more closely to Gabaldon’s concerns, is that Outlander is narrowcast as a romance by the Academy membership, attracting an older (and often marginalized) female audience. And when you try to explain Outlander to the representative Emmy voter who still to this day asks: “What’s it about…I’ve never seen it”, you might find yourself…challenged. [Note: Don’t misunderstand me, I don’t see its complicated pedigree as a negative. One of my favorite recording artists is Lyle Lovett, who is understandably frustrating that music stores—remember them?—have no idea how to classify him. His stuff can be found categorized as folk, as country, rock and even easy listening, because (except for the latter description), these might all be accurate labels. Lovett is an iconoclast—he’s all those things—and I doubt he’d want to be put in any one box]

Some fans have questioned how the show is promoted. No one can really blame STARZ for leaping at the advertising bait of having two very good-looking leads who share a palpable chemistry: there are a raft of sexy photo shoots emphasizing Heughan and Balfe’s charms. In all my years of leading network publicity campaigns, I too would’ve capitalized on the Heughan-Balfe advantage to launch the show. One only has to look at posters and bus cards, the sides of buildings, and the myriad Entertainment Weekly photo shoots to understand what attracts viewers and magazine subscribers. For as many academy voters who might be dismissive of those photos and what they connote, there are a legion of fans who are bound to the show because of it.

But when does the campaign pivot…or does it need to? Is there value-added in an increased emphasis on performances over prettiness? Or equalizing the two? What will it take to get Sam Heughan the respect he deserves for the work he’s put in since Season 1?  I’m sure the capable executives at STARZ, with each new campaign, weigh the value of a growing fan base against the worth of an Emmy. It’s possible there might be more than one promotional direction to take, especially as the fourth season approaches. And there might be something to be said for the adage: If it ain’t broke…  Let’s check back at the end of the summer for the answer to that question…

And here’s the part where I ask: What do you think? What kind of fourth season campaign do you think would attract new viewers? Or, keep viewers who may or may not be getting restless?

Parts 3 and 4, coming this week (I keep finding more and more to share): The good/bad/ugly of social media, why Sam Heughan really did get seasick last season, more on Diana Gabaldon’s consulting role, and my exclusive conversation with Toni Graphia and Diana, where we get to how producers handle those pesky lines the actors question…