There is a Nathan’s hot dog truck in front of the Metropolitan Museum in New York City. Before I go inside to check out the Michelangelo exhibit, I stop and order a dog, mustard only.

I do that because I am a child of Nathan’s. It’s what I know about how a hot dog should taste. Without the snap of skin when you take that first bite, it’s simply not right. Savoring it, I think of my father. He liked the dogs with sauerkraut, and a side of fries.

Phil Rosenthal would get why I’m starting the story about SOMEBODY FEED PHIL, his new original documentary series on Netflix, with this thought. It’s about the inextricable connection between food and family, food and memories, food and place, the exact mantra of the first six episodes that premiere on January 12. 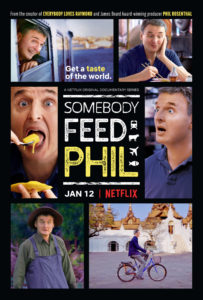 Rosenthal has built his television career on food and family. The creator and executive producer of the much-honored “Everybody Loves Raymond,” (including 69 Emmy nominations and 15 wins), based the show on star Ray Romano’s family and the universal experiences of living multi-generationally. It was no accident that the “fruit-of-the-month” pilot episode struck such a nerve with viewers: it may have been Rosenthal’s own mother who thought her son had enrolled her in some kind of citrus-forward cult, but her reaction was identifiable to millions who weren’t actually related to her. “I stumbled on this universal truth,” he explains. “I didn’t think all of our parents are crazy like that, that you can’t give them a gift without it blowing up in your face, but I discovered the more specific you get, the more relatable it is. I’d get letters from Sri Lanka,” saying ‘That’s my mother.’ I’d think, I don’t know your mother in Sri Lanka, that’s my mother.’”

In Netflix’s SOMEBODY FEED PHIL, Rosenthal is hoping that viewers will relate once again to his everyman perspective as he traverses food stalls, cafes and restaurants in search of the perfect bite, and the perfect characters to help him tell his story. “All you want when you turn the camera on is for something to happen,” he says. After one season on PBS, where the original incarnation of the show won a James Beard Award, Rosenthal says he’s gotten more comfortable and thinks the show has gone through a natural evolution. In the inaugural season on Netflix, he invites viewers to accompany him to Saigon, Lisbon, Bangkok, Tel Aviv, 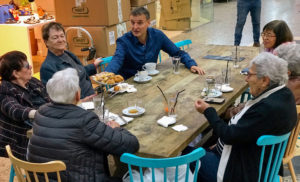 “My motivation is to get you to travel,” Rosenthal explains, “starting with Americans. Two thirds of us don’t have a passport. I think traveling is the most mind-expanding thing you can do in your life, and that’s what your money should be spent on, if you have any extra.” He picks the cities with care. “I know people are afraid to go, afraid of change, afraid of the unusual, so what I’m doing is starting with earth’s greatest hits, the most accessible and least intimidating places.” He concedes that Bangkok and Saigon may be considered a little unusual, but he found that almost everyone speaks English. “There are places where they don’t,” he says, “but I found you can communicate without language.” He will also include American cities because he knows not all people can afford to go overseas. “You can travel in your own town. I can take you down the street to a Peruvian restaurant right now. We’re afraid of what we don’t know, but maybe you’ll see they have chicken and French fries…and maybe your mind expands just a little bit.”

His accessible sense of humor and fish-out-of-water approach “is my way of getting you into the tent,” but, Rosenthal says, “I plan these trips around the food.” With help on the ground from Anthony Bourdain’s production team, Rosenthal sorts through and cross-checks all of their recommendations, and does his own research: “I’m not doing this, I’m not doing that, but that I would try. Sometimes they have to talk me into it. Nine times out of ten, that one I didn’t want to do, that’s usually the best stuff.” Like his slog through a lotus pond in Saigon, where, he says, “I’m in the middle of Vietnam, up to my ass in mud, in water that I can’t see. Who wants to get up at 4am to do that?” But he did it anyway. When Rosenthal nervously asks his guide if there are snakes in the water, it’s real Rosenthal.

“Nothing is scripted. Zero. It’s got to be real, otherwise they smell fake. We write voice-over after. When I’m talking on camera, nothing’s written down. These are the things that are in my stupid head, I talk and talk and talk and we pick the best things I say.”

Nine to ten days of shooting from outlines are whittled down to the best hour, “the funniest stuff, the most fascinating stuff, the most beautiful stuff because that’s what’s going to get you to go,” says Rosenthal. “It’s not just about the food. Entertainment is the sugar that makes the medicine go down. It’s just like on ‘Raymond.’ The laughs are job one. Here, food is the great connector and laughs are the cement.” He adds, “That’s the mission…I’m trying to show you why you should come here.”

The roots of his love affair with food did not actually begin with home cooking. “I didn’t know steak had flavor. I never had a pork chop. We weren’t kosher—we had bacon—but pork chops, that was a bridge too far.” Rosenthal recalls eating in an Italian restaurant when he moved to Manhattan and marveling at the flavor, pointing to the white slivers in the tomato sauce, and asking his friend what it was. “I’d never tasted garlic before,” he says. 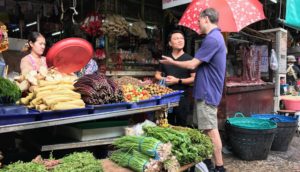 He does credit his mother with making good matzo ball soup, and is quick to add that he owes his parents everything. “There wouldn’t be a show without them.” He ends every episode of SOMEBODY FEED PHIL with a Skype call to Helen, who’s 86 and Max, who’s 92. “They’re easily the best part of the show…my whole career is based on them, including ‘Raymond’. I know how great they are. Why am I flying all over the world? You don’t need me. We could have a show in their living room.”

Rosenthal believes if the show works, it’s because of his specific point-of-view, “which I wouldn’t have had twenty, thirty years ago. I’ve accumulated a personality as we all do. I just hadn’t lived enough. I was as enthusiastic then as I am now about travel, but I couldn’t afford to go anywhere.” Once he figured out a way to see the world, “[it] changed my life. Now my life experience informs what I think.”

He concedes he’s had incredible meals in restaurants most people couldn’t afford, but he calls a blowout like that “a once-in-a-lifetime thing. I treat that like a special occasion…I’m much more excited now about the best hot dog, 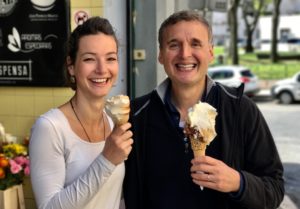 the best slice of pizza I’ve ever had. It’s that childhood thing…if you can get the idealized version of something you loved as a kid, that’s the greatest food discovery.”

Rosenthal praises his partnership with Netflix who, he says, supports his vision, and whose notes they told him “are suggestions,” but he admits right now it’s nerve-wracking he doesn’t yet know if there will be a second season of SOMEBODY FEED PHIL. “They’ve been very supportive, and I think they like the show even though they play things close to the vest, things get out.”

Meanwhile, he shoots (there’s another six episodes in the can) and hopes that people will watch so he can keep doing. “I’m going to places where tourists go, so they’re ready for me. I’m a tourist…I’m like you. The niche I’m trying to fill is the regular guy on the couch who watches Anthony Bourdain, and says ‘He’s amazing. I’m never doing that.’” Rosenthal hopes to persuade the SOMEBODY FEED PHIL audience to think: “If that putz can do it, maybe can I too.” 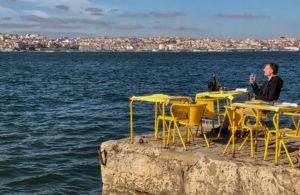 The theme song to SOMEBODY FEED PHIL was written and is performed by the band Lake Street Dive. Rosenthal enthusiastically recommends their youtube videos, and you can see for yourself why: https://www.youtube.com/watch?v=Dl8d8S2g4Rw 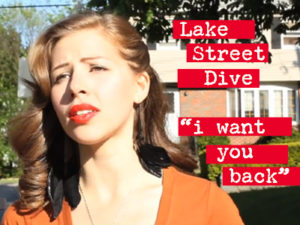