I hear my my mom laughing at me. When we were kids and my father had to work late, or it was his bowling night, she splurged on Chinese takeout. It was New York-style Cantonese, which is what I knew as Chinese food so many years ago [Note: My California friend Lisa tells me this is a dish she ate too. I always thought it was an East Coast thing!]. The order was always the same: egg drop soup, egg rolls and a quart of chicken chow mein. Chicken chow mein then was a melange of stewed vegetables in a thickened sauce with tender strips of chicken, served over a mound of rice and crispy noodles.

Then one day, everything changed. I got a hold of our local Chinese restaurant’s takeout menu and perused it. I saw more exotic choices than the rather bland chow mein. We graduated to shrimp chow mein, beef and broccoli, and lemon chicken. Eventually, I persuaded her to let me try things like butterflied shrimp wrapped in bacon, baked in some kind of eggy coating and coated in a barbecue sauce. When we wandered off the reservation to those chef’s specials, we surely must’ve strained her budget. The chicken chow mein was always much less expensive than the dishes we wanted to try. We scorned her favorite dish—”That’s not real Chinese food, Mom.”  We were obnoxious, we knew it all. We knew nothing…

I remember when we all graduated to venture into Manhattan, to Canal Street. My uncle and my dad had a Chinese stockbroker who wanted to wean them off suburban Chinese food for the more authentic flavors he knew. His name was Lindy Tom. He took them for lunch to a small restaurant called the Happy Garden and did all the ordering from a menu written in Chinese. Even my father, who was not a fan, preferred it to our traditional takeout fare. So it became a Sunday night ritual: our extended family would pile into the biggest car for the trek into Chinatown, look for parking on the street so we didn’t have to pay lot rates, and then stand in line out on the street sometimes for hours, even in the dead of winter, until one of the big tables in the tiny restaurant came open. The waiters cleaned the tables off with tepid tea left over from the previous diners, but the food was so good, my cleanliness-obsessed mother let it go. The table groaned with an assortment of dishes we’d never seen before: chow fun, whole crispy fried fish with eyes and head intact, and the centerpiece, crab in lobster sauce. We ate till we couldn’t, and I don’t think the bill was ever more than $30 for the nine of us.

But it is the memory of that plain Jane neighborhood chow mein that sent me Googling a few weeks. I wanted to see if I could duplicate the dish I wouldn’t be caught dead eating when I was a kid. I think it would qualify as a special kind of comfort food because I connect this dish so closely to my Mom.

It came out exactly the way I remembered it.

Here’s the very easy recipe, courtesy of David Rosengarten. One note: I added chopped bok choy to the celery (two or three whole cabbages, on the smaller size), the napa cabbage and the bean sprouts because I distinctly remember that as an ingredient in the dish. I am not a water chestnut or bamboo shoot fan, so those were never even a consideration, but if you like them, add them. I also poached small strips of chicken in chicken stock (and used a cup of that liquid for the stock the recipe calls for) and combined it with the vegetables at the end. I haven’t tried adding the chicken the way Rosengarten suggests because I remember it as poached, not sautéed, which is the style he rejected, but it’s your choice.

There is almost nothing authentic about chow mein; there is almost nothing even Chinese about it. But the dish that became emblematic of Chinese-American food in the 1950s—an almost stew-y mass of celery, onions and bean sprouts, with a very specific flavor—functions for me, and others, as powerful comfort food. My Dad, for example, who traveled with me to China and became quite a sophisticated Chinese eater, insisted until the day he died that no one was making that “great chow mein” they way they used to do it at The House of Chan in New York City. Well, the following recipe is for him. I have eliminated one of the basic techniques of old chow mein (sorry Dad!); when they were making chicken chow mein way back when, they would just pile some shredded slices of cooked chicken on top of the cooked vegetables. I think you get more flavor, and a better dish, if you cook the chicken with the vegetables (choice of white meat or dark meat is yours). When the chow mein is ready, you can eat it without the usual accompaniments, but I’m recommending that you go the whole retro route: the “mein” part means “noodles,” and chow mein in America was traditionally served mixed with white rice and those crunchy, deep-fried noodles that always appeared on the tables of Chinese-American restaurants.

1. Place a very large wok over high heat, and let it sit for a minute. Add the oil, spilling it around the sides of the wok. When it’s smoking, toss in the celery and the onions. Sprinkle ½ teaspoon of the sugar over them, and stir well. Stir-fry for 2 minutes, then push the celery-onion mixture to the side of the wok, leaving the center empty.

3. Add the cabbage and bean sprouts to the wok, tossing with the other ingredients already in the wok. Add the remaining ½ teaspoon of sugar, and toss again. Turn heat down to medium-high, and let mixture cook for 5 minutes; the vegetables should start losing their distinctness, merging together. 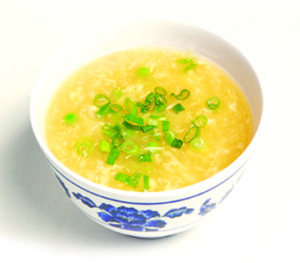 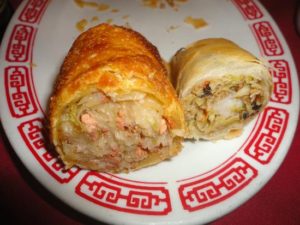