I must read. It’s not a choice, it’s never been a choice. It’s who I am. As I write this, I am surrounded by books, spilling from shelves to floor. Some of the piles are categorized, some haphazard, but it doesn’t matter. Most times, if I want a book, I know where it lives.

In the coming posts, I will share with you the latest title that has left its mark on me, the one I can’t stop thinking about.

To kick things off, here’s a list of indelible novels. I’ll dig in further on all of these, but this is a start.

STONER by John Williams hit me hard and left me dizzy. It’s about a man who became a college professor. Your reaction to this would most likely be: “And then what happens?” and I’d be at a loss to explain. The words Williams chooses to tell John Stoner’s story 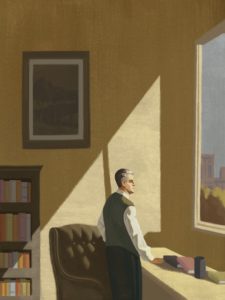 make the difference. STONER has been called the best novel you’ve never heard of. That’s true for me, and I hope if you decide to read it, it’ll be true for you too.

A film starring Casey Affleck has been announced, but if ever there were a project for Ralph Fiennes or Daniel Day Lewis, this would be it. More to come on this…

If you like literary horror, then THE CORMORANT by Stephen Gregory is for you. It was recommended to me by Stephen Graham Jones, who knows something about the subject. [Full disclosure: I studied for my MFA with Dr. Jones, and from a Chuck Palahniuk fan site, here’s one of the best descriptions of his prolific and disturbing work: “Stephen Graham Jones is a man who is constantly writing. He has no choice. He glides through the murky depths of the literary ocean like a shark, because if he stops moving, he’ll die.”]

But I digress. The premise of THE CORMORANT: a young couple inherits their peculiar uncle’s cottage…and the pet bird they must raise as part of the bequest. 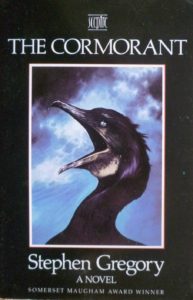 Publishers’ Weekly called it “[An] artful first novel, reminiscent of the tales of Poe . . . Gregory uses a low-key style and subtle lyricism to build an atmosphere of nightmarish horror in a tale that could become a classic.”

I stopped reading it late at night.

There’s a film version of the book, in case you’re interested, and like Ralph Fiennes as much as I do. It used to be on youtube, but it seems to have disappeared.

I own multiple copies of THE ART OF RACING IN THE RAIN by Garth Stein because if you tell me you haven’t read it, I will give it to you. If you ask me to recommend a good book, I will hand it to you. Yes, I am attempting to force you to join me in loving it. The novel is about a dog’s life, told from the dog’s point of view. His name is Enzo. 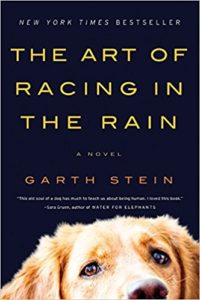 You will never stop thinking about him. You will cry, but in a good, heart-lifting, soul-cleansing way. There is also an audio version of the book. The narrator is a guy named Christopher Evan Welch, and his voice is perfect. Everything about his performance is perfect. I give the CDs away too. Supposedly there is a movie in the works, and this troubles me, because it’s very hard to make interior novels work as films. More to come about this too…

And now a word about Diana Gabaldon’s OUTLANDER series.

If you’re an OUTLANDER virgin, the series is about a twentieth-century nurse who time travels to eighteenth-century Scotland, where she falls in love with a Highland warrior. It’s fantasy, historical fiction, and an evocative love story that is the stuff dreams are made of, and really does defy description. Not even Game of Thrones is as well-rounded.

Yes, I admit, I was late to the party, but this summer I decided to catch up. I did read the original novel back in 1991, and I remember liking it, and can’t for the life of me figure out why I didn’t continue reading. 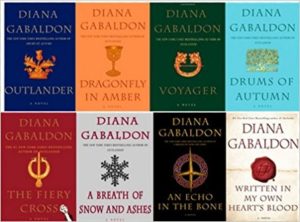 Since then, the prolific and very talented Gabaldon has written seven more books, and novellas, and novels about ancillary characters in the series. [Here’s what she has to say about all this: http://www.dianagabaldon.com/books/outlander-series/] She wrote the first book to see if she could, and I am stunned that her first try was so beautifully realized. She’s a gifted writer with a command of detail that elevates every scene. On a personal note, I read that she writes her scenes out of sequence—if she has an idea, she writes it immediately no matter where she is in the process, and then sees where and if it will fit, a literary jigsaw approach. I write that way too, much to the horror of my mentor and director of my MFA program. I found it heartening and inspiring to know that Gabaldon does too.

Outlander is also a television series. Three seasons on STARZ have been completed, and the fourth is currently in production, scheduled to return sometime in the Fall. I have chosen to read the books after I watch the episodes. Let’s just say devoted OUTLANDER readers have very definitive opinions on how the iconic books are being adapted, and how their beloved Jamie and Claire are portrayed. Kudos to the creative team behind the show for how graciously they handle the passionate objections to what’s been added and what’s left out. But all credit goes to Gabaldon for the power of her fiction and a story as well told as OUTLANDER: her characters leap off the page and become embedded, living and breathing within the readers’ imagination. It’s easy to become proprietary about images that indelible.

As a screenwriter and an aspiring novelist, I’ve enjoyed discovering how they writers have adapted the books, no small task given they have only thirteen episodes, most just an hour long, to cover Gabaldon’s lengthy (some over 900 pages) novels, one book adapted over each season. Ronald D. Moore, OUTLANDER’s executive producer, filled the writers’ room with half book readers, half book virgins to start, because he knew he needed both perspectives. I would love be a fly on the wall in the writers’ room to see how scenes are mapped out on the boards, and to be able to listen as writers fight for which scenes should be included and why.

Since I hadn’t read the books, I also hadn’t pictured Jamie and Claire. 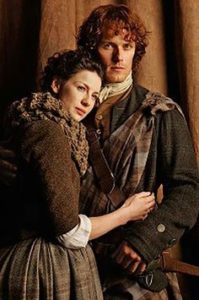 I wasn’t wedded to any particular idea of what they should look like, or how they might sound.

Let’s just say I have no quibbles with the casting of Caitriona Balfe, in her first major role, and Scottish actor Sam Heughan.

As I continue to read and watch, I’ll have more to say about the Outlander saga on both my Books and TV pages. Good news for fans of both:  STARZ President Chris Albrecht told the press gathered for the Television Critics Association winter sessions that he’s optimistic about greenlighting Seasons 5 and 6. 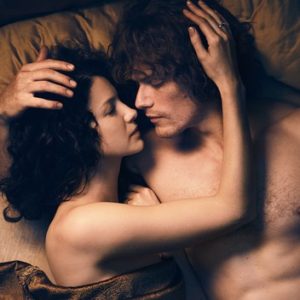