I promised to post some additional info from the second Outlander FYC panel, so let’s  get started:

Caitriona Balfe offers her thoughtful POV on how Claire feels about seeing Jamie again after so many years:

“This is someone she had on a pedestal for 20 years and I think once you come face-to-face with a fantasy, because that’s essentially what he’s been for 20 years, there’s the initial excitement, just the absolute joy of seeing him again, but then you have to strip away all of the fantasy that you’ve built up and get to know the real person in front of you. And with that comes a lot of the doubts and fear of, well, am I enough for this person? Is he the same person I thought I was in love with?…I don’t think we ever doubt they’ll be together, but I think what I loved about [the reunion] was that we allowed for all of that real life doubt to come in…and be explored.”

Sam Heughan on how he’s similar to the character of Jamie:

“You put a lot of yourself in the character and over time it’s been interesting, We’ve lived with these characters so long that you start to see things in your personal life that you can bring to it. [NOTE: Here’s where I would’ve asked, if I were moderating: “Like what?”]…But I also know sometimes it’s hard to separate the two…” [Again, can you give me an example? But sadly, there was no follow-up]

Ronald D. Moore on the difference between the show now and when it first began:

“It’s so much easier [of course, this was said wryly]. It’s gotten harder and more complex somehow year after year. It’s an amazing thing to watch happen. The production team in Scotland, the writers, and the post-production crew in LA, every year, we have just thrown them a completely different show. It’s literally a different show every year. There are no standing sets. Most of the cast is replaced every year, the time periods constantly shift. [Note: here Sam and Cait interrupt warily re Ron’s comment about the cast changes, and he jokes: “You haven’t seen the scripts?]…Season 3 was definitely a year of transition between the old world, or what I think will become known as the Outlander in Scotland and then Paris, and then it crossed the Atlantic and ends up in the New World. The show from this point forward will be predominantly in the New World. We’ll always have a foot in Scotland. It’s not the last time you’ve seen Lallybroch…Season 3 is really the pivot point when the series became a different show yet again.”

Executive Producer/Writer/Director Matthew B. Roberts on the South Africa shoot:

Every season has its challenges…I think we thought Season 3 would be our most difficult yet. [But] Season 4 has been much more difficult. In the past when we shot Prague for Paris, we went for two weeks…it’s always difficult to take your crew to another country. We’ve never actually [done that] for so long. And going to South Africa was a major change…While we really enjoyed our time [there]…it was the first time I ever saw the Scottish crew’s bare legs because normally it’s so cold in Scotland and they moved from that to eighty degrees…instantly, everyone had a sunburn…I would say truthfully, we’re all rather tired, but on the other hand, that’s what keeps it alive and fresh. You never get bored and it keeps you on your toes.

And Matt on Season 4 so far:

“We’re midway through Season 4 right now. We had an initial idea that it might be an easier season, but it wound up being more difficult given the fact that we used to have Scotland as one of our characters….Gary [production designer Jon Gary Steele] and I would go out and find a location, and [say] ‘That’s Scotland’…we’d just run out and find something glorious because it was around every corner. And now we can’t do that because we’re in America, and Scotland’s not America…And now Gary has to build everything, and we have to go and find the right places and it takes more time and effort. We don’t have the character of Scotland anymore…we do, but she portrays North Carolina and she doesn’t give us everything we need all the time.” 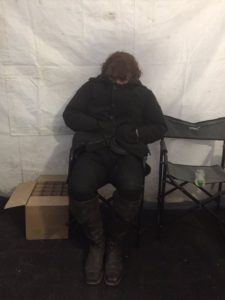 And then there’s the weather in Scotland, always the weather, which Executive Producer/Writer Toni Graphia picks up on:

“North Carolina is supposed to be sweltering, hot, dripping with sweat…eat, sex and love and all that. And sometimes I write a scene and I send it over to them [in Scotland] and they go, ‘There’s a snow storm and we’re not going to be do it quite that way, but we find another way to do it.’ With the help of such talented people as Gary who just builds thing for us to make things happen. It’s amazing what movie magic can do.”