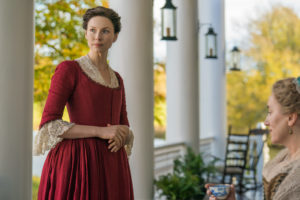 During the much-discussed end of Outlander’s fourth season premiere, the ironic use of Ray Charles’ modern version of “America the Beautiful” played over the scene of the soulless outlaw Stephen Bonnet’s attack on Jamie and Claire Fraser, family and friends. The message, as Jamie noted: the American Dream can, for some, turn into a nightmare. There was nothing romantic about the murderous assault…and this Sunday, November 11 (STARZ, 8pm ET/PT), the horrific struggles for the Frasers in this fraught new world continue.

Episode 2, “Do No Harm,” begins with Jamie and Claire’s arrival at Jocasta McKenzie’s plantation, River Run. Jamie hasn’t seen his aunt, his mother’s sister, since he was  boy, but she welcomes her nephew and Claire to live with her indefinitely, even though they are now penniless thanks to Bonnet’s attack. The beauty of River Run is marred, however, when they are jolted by the reality of this North Carolina—slaves serve 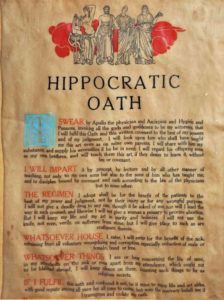 Jocasta’s household and toil in the fields—something Jamie, who remembers all to well what it means to be dominated and mistreated, and Claire, who understands the history of oppression that took a civil war to change, are not willing to accept.

Again, to avoid spoilers, suffice it to say that their resistance to this troubling way of life creates an upheaval before they have even managed to take advantage of Jocasta’s generous offer to stay at River Run. Everything they believe, everything they have learned, and ultimately, Claire’s Hippocratic oath, is put to the test.

There are many Outlander fans, who often watch episodes and seasons over and over again, who have written in social media posts about their reluctance to view Season One’s “Wentworth Prison” more than once. In that episode, Jamie is broken by his psychopathic nemesis Black Jack Randall. The British Captain of the Dragoons beats, tortures and rapes the Highlander, who refuses to bend to Randall’s will until he has no choice —he finally agrees to submit to Randall in exchange for Claire’s safety.

For many reasons, “Do No Harm” may be equally difficult to rewatch. There are moral dilemmas that may not involve torture, but can scar. This episode ends with Claire in the crosshairs, faced with as horrific 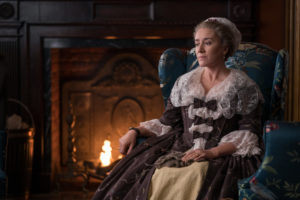 a decision as Jamie was forced to make 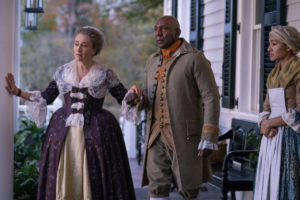 , which undoubtedly will cost her a piece of her soul.

As anticipated, Episode 402 introduces the accomplished Maria Doyle Kennedy (Orphan Black, Downtown Abbey, Dexter, The Commitments, The Tudors) as Aunt Jocasta. (It is best to remember she is a MacKenzie, of the same manipulative stock as her brothers Dougal and  Colum). If you enjoy seeing actors transform themselves from role to role, you have only to check her out in the delightful Irish detective series Striking Out (Acorn TV, available by subscription via Amazon Prime Video). Colin McFarlane (Batman Begins, The Dark Knight) also stars as the River Run houseman, Ulysses, who serves and protects Jocasta but also understands Jamie and Claire’s perilous position in the household and in a community that has no interest in change.

The performances and the production values continue to be top-notch, including the work done by Outlander co-costume supervisor Terry Dresbach, for whom Season 4 is her last. Her breathtaking designs over the past five years have earned  her two Emmy nominations in 2016 and 2018, an avid social media following, and museum costume displays in Los Angeles and other cities. Her Outlander America work continues to show the attention to detail for which she is known and admired.

I previewed “America the Beautiful” but was prohibited from reviewing the episode early. I did have a few quibbles, some not even worth mentioning given how well I thought it all came together. The use of the Ray Charles version of “America the Beautiful” superimposed over the dialogue in the season premiere was particularly controversial, with some viewers taking offense, accusing Outlander of being overly political. Executive Producer Maril Davis took to Twitter to counter that charge: “As one of the people involved in making this decision, I can assure you the song is NOT a political statement. I would have zero issue saying so if it was…But, as this is a free country, you are allowed to feel and think how you like.”

I come down on the side of Outlander fans who had reasonable aesthetic objections. Walk off the Earth’s cover version of Bob Dylan’s “A Hard Rain’s A-Gonna Fall” [https://ew.com/tv/2017/10/02/outlander-walk-off-the-earth-song/] worked beautifully in Season 2’s “Of Lost Things,” where Jamie had to leave his illegitimate son behind. It magnified the moment rather than burying it, and provided a meaningful soundtrack to Sam Heughan’s quiet, heartbreaking performance, much like composer  Bear McCreary’s melodic and always

relevant score has done across all four seasons.

The song “America the Beautiful” had the opposite effect. It took many people out of the scene. Perhaps it was because the jarring jazziness of the Ray Charles version clashed with the time period and wound up competing with the shocking series of events tripped into motion by Bonnet and his henchman. What you never want is for a creative decision to undercut a pivotal moment such as this final scene. I admire the risks taken by the Outlander creative team, but not all of them work.

Fans also found fault with the green screen work in “America the Beautiful,” which was puzzling, given the gargantuan task Outlander faced in shooting Scotland for North Carolina. The misplaced geographical references were also an issue for viewers who know where the Blue Ridge Mountains and Cape Fear river are on the map. It’s worth mentioning that Outlander takes typical liberties with settings and geography as most television shows, and does a better job of it than many. Those moments can be disconcerting, but they’re not done out of ignorance or sloppiness—it’s a production compromise.

One last thing: As I’ve noted in my coverage of Outlander, I am new to the show. There’s so much TV to watch that it took some enforced downtime with a broken ankle for me to binge the series, which had been on my list for a while, just in time for the arrival of Season 3.

I hope, since I’ve spent my entire professional life in the television world at a very high level, what I bring to checkyourlocallistings.com is that insider perspective. Visitors here seem to like it.

So here’s what I can tell you about Outlander beyond the episodes I review. I have worked with countless executive producers and talent and I have NEVER witnessed the level of engagement Outlander producers, actors and crew offer to their fans. NEVER. Their graciousness and willingness to share in interviews and on social media goes above and beyond. I admire them for it. As a publicity exec, I would have killed for this kind of cooperation from my shows. Most of the time, I had to “persuade” top producers and actors to do interviews, go on tour, pose for photographs, interact with large groups of admirers beyond obligatory new season responsibilities. And to ask them to do this stuff on their hiatuses? Rarely happened.

So it pains me to see the rudeness displayed in SM when certain Outlander fans don’t like creative choices made, when the talent is attacked for acting choices, when book lovers trash script decisions (I assume book readers know that Diana Gabaldon’s books, which are thousands of pages long, present a real challenge for Outlander writers and producers. Fiction is one medium; television drama is another. Often, the twain cannot meet the way you see it in your imagination. I can’t understand why that nickel hasn’t dropped into the slot, especially since Diana Gabaldon has learned to let go) 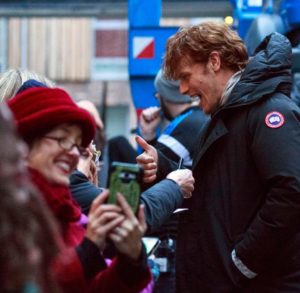 People tweet and post hurtful things they’d never have the courage to say directly to those involved in the show because of the anonymity SM affords. It’s wrong. Plain and simple. Like Maril Davis, I support anyone’s right to hold opinions, but it’s how those opinions are offered that concerns me. I mention this today as a well-meaning warning from someone who has seen bad behavior do irreparable damage. I was quite taken aback by fan reviews of last week’s premiere. When I don’t like an episode or a film or a book, I craft my negative reviews. I pick my words carefully because I know how painful words can be. There’s nothing careful or thoughtful about these posts I’ve seen. If fans continue to take potshots, and continue to behave as they did after Sam Heughan and Caitriona Balfe had Wizard World conflicts, for example, the day will come when the Outlander folks begin to disengage. {Full disclosure: I was personally and financially effected by the WW schedule changes, but I read the disclaimers every convention post, and knew what the risks were]

Right now, everyone on Outlander seems to be able to react, withdraw, brush themselves off, and then return to interact after an incident. I imagine it’s because the majority of Outlander fans know how to behave, and everyone at Outlander appreciates their support and their enthusiasm. [It works both ways. Underappreciated shows would kill to have a following like Outlander does. I can remember hearing from a fan who actually liked a critically acclaimed drama I was working on that no one was watching. When she called me to ask about it, I send her a crate of goodies, I was so grateful to have heard from her. It seemed like proof of our existence)

I would hate to see the nasty minority in Outlander fandom undercut a lovely relationship. The generosity of the Outlander creative team should not be taken for granted.

So please, think before you speak, tweet, post. Actors and producers are people too. You can take issue with an episode, a line reading, and adaptation choice, a wig, or a costume without being vicious. A world has been created for you, and it won’t last forever. Live in it kindly.