When Sony Pictures Home Entertainment invited Outlander fans last week to the historic Sony lot for a sneak peek of the Season Three Blu-Ray DVD and the Limited Collector’s Edition, perhaps they thought they wouldn’t need more than the hundred seats the screening room on the lot held.

Turns out, they could have filled the Jimmy Stewart Theater more than four times over.

Southern California Outlander fans are dedicated. They’re curious. And given this is only the beginning of the long summer slog without new episodes of the show they adore, nicknamed Droughtlander, they were chomping for Outlander news. They began responding in the wee hours after the SPHE invitation was posted online, and the waiting list soon swelled to more than 400. Not only did people on the West Coast email their interest, but fans who lived in other parts of the country wanted to attend, much to the surprise of the Sony team. The main draw: Outlander author Diana Gabaldon and series Executive Producer/Writer Toni Graphia, plus the chance to get a look on what the Season 3 package contained before its April 10 release date, all of which inspired the RSVP overload.

The lucky few who gained admittance to the sneak peek event, including some who made it in off the waiting list, received a souvenir photograph of themselves against a Jamie/Claire background while they waited to claim their seats, all the while serenaded by a talented piper who played her arrangements of the Bear McCreary Outlander score including the main theme, familiarly called the Skye Boat song. A reception followed the event with Scottish-themed libations and the chance for all guests to get their commemorative photos signed by Gabaldon and Graphia, who graciously posed and autographed until everyone was accommodated.

But before that, inside the theater, Entertainment Weekly writer Maureen Lee Lenker, dressed for the occasion in plaid and pinch-hitting for Lynnette Rice, moderated the festivities. No one was allowed to record audio or video of any of the clips from the DVD that were shown, only the panel, which also included a short audience question-and-answer session.

Gag reels are always well-received—who doesn’t enjoy seeing actors step outside their characters and be themselves?—but the snippet shared with the crowd was dwarfed by an 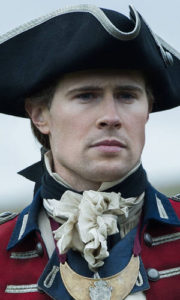 Lord John Grey (David Berry) and Lady Isobel Dunsany (Tanya Reynolds). Toni Graphia said when producers were asked to come up with something exclusive, they asked themselves: “What would people really want to see?” and they chose to show more of John Gray and Isobel’s story. “How do these two get together? And how did that [proposal] happen?…We love Lord John, of course, and Isobel was wonderful…but she had kind of a smaller part in ‘Of Lost Things.'” So, Graphia said, the producers decided, “Let’s see the two of them together because we think it will be magic, and it was.” The extensive scene is beautifully written and performed by both actors whose Outlander characters truly know the meaning of unrequited love. More exclusive scenes for the fans will be filmed in the future, and if they’re as lovely as this one, will be value-added additions to the higher-priced DVD set.

And how does Gabaldon feel about invented scenes like this one, which was not in her book. “It’s always fascinating, but in most cases it’s something I didn’t intend to do in the book, and therefore I don’t have a specific vision of it, so it’s fun to see what they did with it. In this particular instance, you will see my take on that in the fourth John Gray book.”

In the ongoing fission that exists between some book readers vs. series viewers, there is always a curiosity about how the author sees her books translated to the screen, and Gabaldon was asked if sometimes she’s given pause when something’s added or deleted. “Yes, every once in a while. There was a particular scene in a Season 4 script…I said, this will come as a surprise to people reading the book…By and large, they send me the outlines and the scripts as they’re written…each script goes through one, six, seven, eight, even more revisions before it films. But the main cuts are made during the editing process, which means I will not see them before I get that first cut.” If she sees something that’s important enough for her to send a note to the producers, she’ll explain why she feels as she does, adding, “totally up to you, of course.”  Sometimes the producers agree and the change will be made, she explained, and sometimes the producers think it will interrupt the flow, and the solution is to include the moment in the deleted scenes.

There are 27 deleted scenes on the Season 3 DVD, which adds up to a hefty amount of material left on the cutting room floor. This led Lenker to ask Graphia if there was ever any consideration to splitting books up rather than doing one a season, and Graphia said they wouldn’t rule it out. She mentioned that initially, scripts clocked in at fifty pages or more, “much to my chagrin,” meaning, regrettably, she said, more scenes had to be cut to make time, but now they run in the high forties. “You can’t risk coming in short,” she explained, and revealed that the fire in the print shop episode did. The producers added back a scene where Fergus and Young Ian are selling barrels of crème de menthe, which Outlander fans know is used for something slightly more nefarious than drinking (they had to pick up that scene “in some alleyway in South Africa,” Graphia said) This prompted Gabaldon to explain an actual moment like that cropped up in her historical research. “Someone had died on a ship and they preserved his body by putting it in a barrel of spirits, and I thought, ‘Cool, I could use that.'”

The discussion shifted to the construct of Season 3: the separation of the Claire and Jamie story lines. Graphia said: “I don’t think we had episode six, or an exact number, but we knew we wanted it to be long enough that you really felt the absence and so you could enjoy when they got back together. We also wanted a glimpse into their lives apart…[but] they were never really apart…they dreamed about each other, they saw ghosts…It was the elephant in the room. Jamie was very present in the Claire story and Claire was right there in the Jamie story, but it was fascinating to see the holes they left in each other’s lives and what their lives were like apart.”  She added, “We did look for the metaphors. He’s in prison, but she’s in prison too, in a townhouse in Boston, and her marriage…we just really wanted to explore that..I knows it was rough for everyone, but listen, it was sweet torture.”

TOMORROW and WEDNESDAY: Diana Gabaldon addresses how she feels when Outlander is called a romance…the good/bad/ugly that is social media…the line that Sam Heughan didn’t want to say and how producers handle those actor situations…and my exclusive one-on-two interview with Diana Gabaldon and Toni Graphia 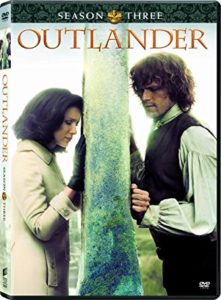 ON SALE TOMORROW, APRIL 10! Outlander: Season 3 contains all 13 episodes in a five-disc Limited Collector’s Edition, Blu-ray™ and DVD sets, along with 27 deleted and extended scenes with introductions by Executive Producer Ronald D. Moore, a gag reel and two featurettes. In “A Traveling Show Takes Sail,” the cast and crew describe what it was like moving the production from Scotland to South Africa and the challenges shooting aboard the Artemis ship; and Lotte Verbeek and other cast and crew discuss Geillis Duncan’s return this season in “The Transformation of Geillis Duncan.”

The Season 3 Limited Collector’s Edition and Blu-ray™ exclusive content (it’s not appreciably more expensive than the above DVD but currently shows as sold out on Amazon) includes an exclusive additional scene with Lord John Grey & Lady Isobel Dunsany from the episode “Of Lost Things,” the original chemistry test between stars Caitriona Balfe and Sam Heughan with an introduction by Executive Producer Ronald D. Moore, the Outlander podcasts for each episode with commentary from Moore, Executive Producers Maril Davis, Toni Graphia and Matthew B. Roberts, and four additional featurettes: “Claire & Jamie: Together Again” discusses what it was like for Caitriona and Sam to work separately for half of the season and what it was like reuniting their characters after 20 years had passed, while “Jamie’s Revolution” and “Claire: Through Time” have Caitriona and Sam discussing their characters’ journeys this season. “Saying Goodbye to Frank & Jonathan Randall” is a final farewell to Tobias Menzies and both of his integral characters, Frank and Black Jack Randall. In addition, the Limited Collector’s Edition Blu-ray™ will feature special packaging, including 28 pages of behind-the-scenes photographs.