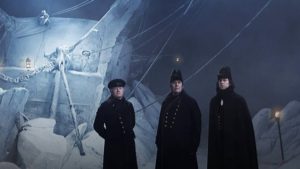 Don’t say I didn’t warn you: THE TERROR is not the series you want to watch right before you go to sleep.

Full disclosure: I like scary monsters. I’m not a chainsaw massacre kinda girl. But things that go bump? In books, in films or on television, sign me up, especially when the creative people know how to withhold the evil entity until you’re primed to jump out of your skin. This is something THE TERROR’S executive producer Ridley Scott knows a little something about. I don’t need to remind you how you felt when you first saw “Alien.”

There’s a comparison game that’s played in Hollywood, in which you use examples of past hits to describe the current project you’re pitching. For instance, supposedly “Speed” was pitched as “Die Hard” on a Bus, “Scream Queens” as “American Horror Story” Meets “Glee”, and Alien?  “Jaws” in Space. I mention this because I’ve already seen a review of THE TERROR that called it “Alien” in the Arctic. It’s a glib throwaway that probably sounded really clever in the critic’s head (shame on you, NY Times)

THE TERROR is not as simply described as that.

This harrowing miniseries, starring Jared Harris (“Mad Men,” The Crown”), Tobias Menzies (“Outlander,” “Game of Thrones”) and Ciáran Hinds (“Persuasian,” “Game of Thrones,” “Jane Eyre,”) is based on the very creepy Dan Simmons’ novel of the same name. It is inspired by the true story of an ill-fated 1845 British Royal Navy expedition into uncharted territory to discover the Northwest Passage.

One bad command decision in treacherous, subzero conditions traps the men of the HMS Terror and the HMS Erebus in icy conditions that are impassable.

Their only hope is that they will somehow be able to make their way out into the open sea. As conditions worsen and supplies dwindle, they find themselves at the mercy of an unknown predator that has targeted them with an inexplicable vengeance, pitting officer against officer, crewman against crewman, and reason versus insanity.

The series is being teased as horror, but first and foremost it’s a Masterpiece Theater-type drama, meaning there’s a lot of talk with multiple British dialects (sometimes hard to understand, so go with the close captions). It’s a dense character study, and even though the first episode wastes no time in making sure you know this is going to be quite scary, the pacing is deliberate, and I suspect less patient viewers will bail. I must also emphasize THE TERROR is not for the faint of heart. There are crude surgeries, horrific injuries, blood and gore, not very Masterpiece-y at all. So if smart dialogue and graphic moments don’t appeal, what will keep you there for ten hours? Simple. As in any good story well told, you will need to know what happens even though you know it’s not going to be a happy ending.

Across the board, the performances are top-notch, most particularly Jared Harris as Captain Francis Crozier. Irish by birth, he knows he will never get the promotion to top rank he deserves in the British military.He has a personal relationship with Sir John Franklin (Hinds): he’s been in love with Franklin’s niece for years, and forbidden to marry her because the captain thinks Crozier is not worthy. Franklin may be the senior officer, but he’s a blowhard and his ego gets in the way of his decision-making.  Menzies, once again charged with making a flawed man multi-dimensional, is Captain Fitzjames, Franklin’s second in command. He looks down on Crozier’s experience and his drinking problem, all the while inflating tales of his own military accomplishments—hubris plays into the fate of all these men.

While all of the actors do a fine job, Paul Ready, who plays Dr. Goodsir, the junior medical officer aboard the expedition, is a standout. He imbues Goodsir (if ever there were a name more suited to an upstanding character) with kindness and decency, and handles the more emotional content he’s given with grace. Nive Nelson’s Lady Silence, the Inuit woman who tragically intersects with the men of the Terror and Erebus, is also noteworthy.

THE TERROR’s production values are as much a character as anyone in the series. The ships are seen as minute specks in the frozen Arctic landscape where they are literally suspended, unable to move, boxed in by ice that even dynamite cannot vanquish. The episodes are awash in freezing whites, grays and blues, punctuated by the eerie cast of a northern-lights sky.  Everything about the production is Ridley Scott big, and much credit is due to production designer Jonathan McKinstry, art drector Matthew Hywel-Davies and the cinematographers—Frank Vanden Eeden, Koija Brandt, Florian Hoffmeister and Marci Ragályi. You might be interested in this link to the extraordinary title sequences, which add to the otherwordly feel of the series: http://www.artofthetitle.com/title/the-terror/

I would be remiss if I didn’t mention the ghostly score, shot through with unsettling chords that make your skin crawl and the goose bumps rise. The experimental composer, Marcus Fjellström, was just in his thirties when he passed away in the Fall of 2017. What a loss.

“The Terror,” is produced by Scott Free, Emjag Productions and Entertainment 360 in association with AMC Studios. In addition to Scott, David Kajganich and Soo Hugh, the series is also executive produced by David W. Zucker (“The Good Wife”), Alexandra Milchan (The Wolf of Wall Street), Scott Lambert (Paranoia) and Guymon Casady (“Game of Thrones”). 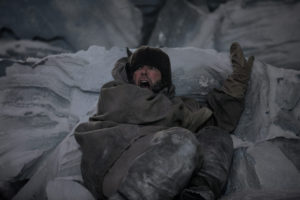