My mother never wrote down recipes. This she learned from my grandmother. I realized once I got married and wanted to start making family favorite meals, I would have to insist that they did.

You would have thought I asked them to stick needles in their eyeballs. Oh, the moaning and the complaining and the excuses!

“You’ve watched me make it a hundred times, what do you mean you don’t know how I do it?”

“I make it different every time, how do you expect me to remember?”

“Who uses recipes? I never cooked from a recipe in my life.”

In my family, recipes were handed-down generationally. I get that, it’s charming. And yes, I knew that I could have stood at my mother’s elbow with pad and pen and take notes, if only I’d been more persistent.  I just thought one day, when either of them had a spare moment, they’d enjoy writing the recipes down. My idea was to create a family cookbook. I thought that was a charming idea, and would make a great shower present for my nieces…heck, for anyone.

Neither my grandmother nor my mother agreed, which is why I have exactly three of their best recipes, written in their fading hand on 3″ by 5″ index cards. Three. Only three. And though I think regrets get you nowhere, this, I regret.

Now, my mother thought of herself as a good cook. I would tweak that assessment slightly (no disrespect intended, may she rest in peace and not give me the horns from up in heaven) to say there were certain things she made very well. It seems churlish to bring up the oatmeal cookie she made, singular, because she left out the flour and the oatmeal and sugar and butter just coated the entire cookie sheet in one sad blob…or the pork chops she incinerated so we wouldn’t get trichinosis, which was a commonly held fear during my childhood.

She made, first and foremost, excellent lasagna and marinara sauce you’d swoon over. The secret to her incredible, oft-requested potato salad was pickle juice. I never heard of Italian potato salad before or since—potatoes tossed with slivers of roasted red peppers and whole cloves of garlic, dressed with great olive oil—but she made it and I, who am mayonnaise-phobic, loved it. She made killer beef stew, in which the onions and the potatoes turned brown, infused with the rich gravy they’d simmered in. The labor-intensive dish she called chicken cacciatore in no way resembled the original style, but the way she was able to persuade the chicken and onions and mushrooms to sweeten and meld together was mind-blowing. She cast the same spell on eggplant parmagiana. Unlike the stuff you order in most Italian restaurants, which is  so bread-crumb forward you can’t really tell what’s underneath the tomato sauce and the mozzarella, her version was a molten slice of sweetness that made your tongue dance, where the rich, velvety sauteed eggplant became one with the sauce and the cheese, yet each flavor was identifiable. I can still picture it bubbling in the see-through Pyrex loaf pan she chose to bake it in. If I had recipes for these, I’d share them…but I don’t. (I’ve come close with the lasagna and the potato salad, and I will share those recipes in a future post)

My favorite thing she made, hands down, and which I requested any time she asked, “What do you want me to make for dinner when you come home,” was lentils and spaghetti. It’s an incredibly simple pasta dish, and I make it any day I need to see her. (This dish was born of necessity if you were Catholic, which we were. She was Good Friday-creative, beyond frozen fish sticks. That’s where broccoli and spaghetti and ciceri  (Sicilian for chickpeas) and spaghetti  came from, both in her meatless rotation. Unlike most stuffed pepper recipes you can google, hers were loaded with rice, chopped mushrooms, parmesan cheese and bread crumbs, which came together to look more like Thanksgiving stuffing, except it was scented with the greeness of the bell pepper it was baked inside)

I am not digressing. I bring all of this up as an intro to the meatloaf in the subject line of this post. My mother, you see, made an incredible meatloaf, a meatloaf that even skeptics liked. It was moist, it was flavorful, it was light, and if there was any left over, it elevated the cold sandwich.

But I don’t know how she did it. I know that she bought the meatloaf trio in the grocery store. Where I grew up, you could find three neat concentric circles of chopped beef, veal and pork shrink-wrapped side by side in the meat section. When I asked where I could find that package shortly after I’d moved to California, the butcher looked at me as if I were speaking Mandarin. (Don’t even get me started on steak for bracciole. That’s also a thing in Queens, but in Los Angeles? Ask for that at your local Ralph’s just for fun)

So I have never been able to duplicate it. I close my eyes tight and I can see some of the other ingredients. Chopped onion, fine. Green bell pepper, diced. On the top, thin slices of tomato from the garden, and a dusting of Progresso Italian styled-bread crumbs as garnish. Eggs? Yes, I think there was an egg.  But was there grated cheese? Maybe. Did she bind it with jagged tears of white bread soaked in milk? Is that an actual memory, or did I read it and appropriate that idea from some magazine? Maybe she used more of the breadcrumbs. I just don’t remember. Was there ketchup? Or tomato sauce? I don’t know, maybe. There must have been, right?

You would think if I threw all those ingredients together and baked it, my mother’s meatloaf would appear. But this has never happened. Hopeful tries, epic fails. Meatloaf bricks that taste nothing like hers, look nothing like hers, smell nothing like hers, destined for the garbage bin.  I am resigned to her meatloaf existing only in my mind’s eye, a taste memory. I asked my sister if she knew Mom’s recipe. She did not and remembered less than I did about how she made it.

If only Mom had written it down…

So…and no, I am still not digressing…this is why I never order meatloaf in a restaurant, and I never believe anyone who tells me they do, in fact, have the world’s greatest meatloaf recipe. I don’t believe them because I’ve tried their versions and they’re just not right. Some of them are just terrible.  Ritz crackers, corn flakes, oatmeal…none of these binders are the secret ingredient, sorry.

And because hope springs eternal, at least in meatloaf land, I was willing to try one more time. My friend Greg shared with me the recipe for his meatloaf with the eponymous and modest title of…Greg’s World-Famous Meatloaf. Greg, my former boss in my long-ago publishing life, has exquisite taste. He owns hundreds of cookbooks, He’s written/edited/published cookbooks. He’s a foodie with whom I often agree with on what makes a good restaurant. So though I laughed when I saw the name of his recipe, I had faith.

My faith was not misplaced.

Greg’s meatloaf is not like my mother’s in texture (how you get meat to be fluffy, I do not know), but it comes the closest in moistness and flavor. It’s simple to put together, the aroma that fills the house is divine, and it’s absolutely delicious. All this background about my Mom, then, is really an homage to Greg’s recipe. Therefore, you might just believe me when I tell you it’s worth making.

I’m not going to re-title it, but if I were to do that, I’d simply call it the Second Best Meatloaf in the World.

Here’s the meatloaf recipe, followed by the origin story. (And in a separate post, I will share the lentils and spaghetti recipe, mentioned above, which comes the closest to hers of anything I’ve ever tried to make): 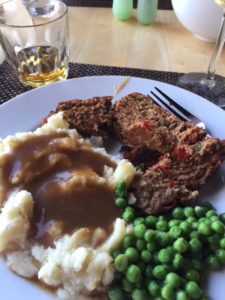 Serves 6 with leftovers for sandwiches

½ pound ground veal or if not available, ground turkey (look for darker meat)

½ cup dried breadcrumbs (I use Panko)

Note: The reason I advise you to use the shallowest pan possible is to allow as much surface of the meatloaf to brown into a crust, which will give the meatloaf even more flavor. I now use a heavy duty baking sheet (9” x 13”). Just make sure you keep an eye on the fat. You may have to spoon it out of the pan more than once. The leaner the meats used, the less fat.

Instead of Parmesan, you can add 3/4 cup of diced mozzarella, or pepper jack cheese.

Sometimes, I’ll go for a more barbecue-style meatloaf, in which case, I keep the oregano, and mix 1/3 cup of ketchup with 1/8-cup of Siracha sauce (don’t worry, it won’t be too spicy), and 2/3 cup of your favorite barbecue sauce as well as 1 cup Panko crumbs and eliminate the parmesan (you can cube cheddar chesee instead or use no cheese at all). Paint the top with barbecue sauce.

Check your Ketchup. Don’t use any with fructose corn syrup.

From whence it came:

“I started to make this meatloaf when I first arrived in New York City in the early 70s. It was cheap and could extend to a few meals or lunch sandwiches, in those early poorer days. The basic recipe began with my mother’s which started with raw onion and green pepper, ketchup, and Quaker Oatmeal. So I made her version, which I had eaten in about five years. My palate was evolving because the first thing I noticed was I didn’t like the raw onion and green pepper. So I sautéed them in a little olive oil until they softened about 7 minutes on medium low heat. I didn’t like ketchup until I figure out much later on that most ketchup on the shelves of the nation’s supermarkets had corn syrup. I didn’t like the slight sweetness. So I used small cans of Hunt’s tomato sauce–about half of an 8 oz. can. I painted the top of the meatloaf with the remaining tomato sauce. I didn’t like chewing into bits of oatmeal. So I used bread crumbs and grated Parmesan or even Pecorino-Romano, until I decided to try using Panko crumbs. I often add a rounded teaspoon of Penzey’s Italian seasoning because I like their combination.

“I have tried many variations–cubes of mozzarella, hard boiled eggs, spinach, ham–even prosciutto. But it didn’t become my recipe until I broke with Mom completely, and mixed my meats. Hers featured ground beef only. Mine had ground veal, beef and pork (out here, I can’t find ground veal easily, so I use dark turkey meat–ground). I had never heard of a panade before (the mixing of crustless bread and milk added to the ground beef to ensure its tenderness), so I didn’t make one. Mine had plenty of tenderness because it had the tomato sauce and I didn’t overwork the mixture. I was never tempted to put other strange things in my meatloaf such as pickles or capers. Carrots and celery never had a place in my meatloaves. I also always drained my meatloaves of their fat after one hour. It sill had more fat to be drawn off when it was cooked. It also ensure the loaf would be compact for sandwiches the next day.

Now this doesn’t mean I invented the wheel, just the fact that my version is more interesting to me than my mother’s. A friend makes a divine version of my recipe, but she does it on her barbecue grill, and shapes it into a shallow aluminum throw-away pan. It gives the surface a delicious crust which is irresistible. So the recipe has evolved over the years.”