And now a word about Jerry Lewis, for no other reason but I have been thinking about him…I know that Lewis had a reputation for being, well—let’s just say—difficult. The first movie I ever saw on the big screen was The Bellboy. My father took me and my sister to the drive-in in our pajamas. (I was a devoted Jerry Lewis/Dean Martin fan, and was tickled that my Uncle Andy looked—to me—exactly like Jerry) “Let’s All Go The Lobby” crackled over the speakers and we persuaded my Dad to get us pizza. It was way past our bed time, so you remember things like this, a soggy, underdone pizza and Cokes…along with my abject mortification that he lied about our ages so he didn’t have to pay admission for us. 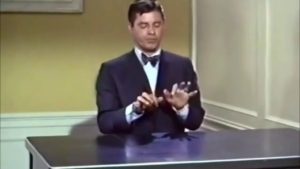 You can imagine, then, why I was reluctant to meet Lewis when he was cast in a ten-episode arc of WISEGUY, known as the garment center story line. (It also starred newcomer Stanley Tucci) I’d heard all the horror stories, so I called a former colleague at Doubleday who had just worked on Lewis’ latest book for a temperature check. She told me she loved him, and that we would get along just fine because I was his kind of person.

His long-time manager Joe Stabile asked me for a letter of introduction and a publicity plan, which I sent. A day or so later, my phone rang and it was Lewis. Himself. No people. He said yes to everything I requested and said if I was always this clear and thorough, we’d get along great.

And we did. I spent a lot of time with him. The first day I arrived on set to find him doing some of his more famous bits for the crew. They were lapping it up and the ice was broken. He was prepared every day, he was kind every day. We spent long hours in the back of town cars going to media interviews. He showed me who he was when it was just me and him in a car. He was having some issues with MDA bureaucracy and it was breaking his heart. There was no grandstanding. I saw humility. Yes, humility. (I haven’t been able to bring myself to watch the MDA Telethon since they canned him. They lost me as a contributor that day)

At the end of the WISEGUY shoot, he gifted every crew member with a watch. On the face was the familiar Lewis rubber-bandy caricature.

A few years ago, I bought a ticket to see Lewis do his act at the Saban Theater in Beverly Hills. The theater was hardly sold out. Lewis had to sit to do some of his bits, including the typewriter, which I will post below, but he made me laugh. He made a lot of us laugh. He was alternately funny and curmudgeonly. I’m glad I went, and I went knowing it would be the last time I’d see him. 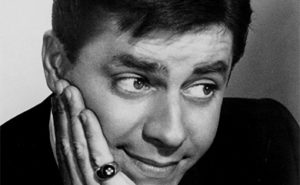 If you’re tempted to post horrible stories about him here, please don’t. I get it. There are plenty of them, but no one is any one thing every day of his life. Who knows, maybe I got lucky. Or maybe I was just his kind of person.

This is one of my favorite routines. It never gets old.